So, I have the great pleasure in announcing that When Summer Ends has been selected to be included in a promotion by Apple Australia and New Zealand! (photo below!)

My novel has been included as one of the “Books By Bestselling Authors” in their new promo and will be FREE in the Australian and New Zealand iBookstores from today until Tuesday 11th June!

I would like to say a huge thank you to Apple who have been a great supporter of mine since I published, and also want to throw in a massive congratulations to all the other authors that have been included in their fabulous new promotion!

Hopefully some of you can grab my book while it’s free!!!

This is the link to it in the Australian and New Zealand iBookstore: https://itunes.apple.com/au/book/when-summer-ends/id566641042?mt=11

Hope you have a fantabulous day! 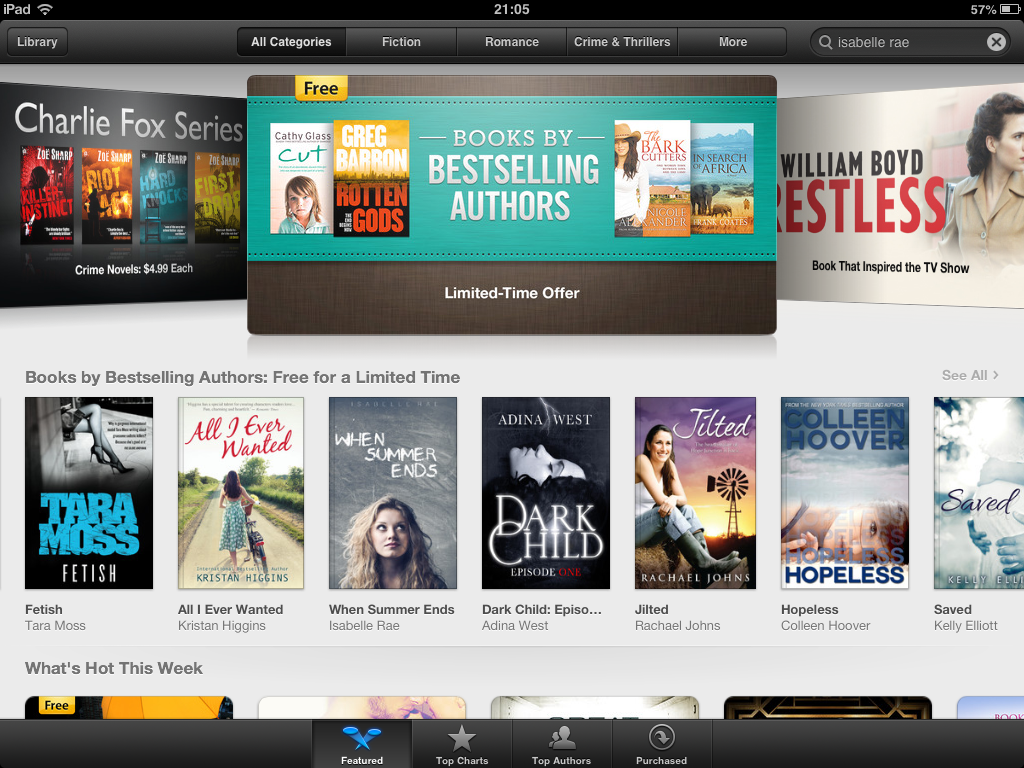 So, I’m a little behind with setting up this website really. If I was more organised (which has never been one of my strong points) I would have set this site up at the same time as publishing, that way I could have added all the achievements and stuff as I went along… but no, that was too easy!

Now I’m torn though, because lots of things have happened in the last few months – way too many for me to sit here and type out because I’d most likely forget things, and you’d most likely fall asleep through boredom! So instead I’m going to do a little overview and post links to other stuff at the end! Hopefully that will suffice, and then from here on out I’ll try to post things as they happen!

When Summer Ends was Independently published in September 2012.

With my strong Wattpad followers, it did brilliantly almost instantly. It climbed to the top of the iBookstore chart, getting to number one in Australia, Canada, and the UK, and number two in the USA under the Children & Teen category.

The story continues to astound me and has not once left the top 100 books for those countries in the iBookstore. In fact, it held the number one spot in the UK and Australia for almost four months!

Today, it is still number 2 in the UK. It actually boggles my mind a little if I’m honest. I still don’t think, after six months, that it has sunken in. Maybe it never will…

Now for a few links because by now you’re surely getting bored….

This is a link to an interview I did when my book got to number 2 on iBookstore in the USA. http://www.kidsebookbestsellers.com/2013/02/when-summer-ends-from-wattpad-to-ipad.html

Laura Burman, PhD, listed my book as one of ’35 Books to Read After Fifty Shades of Grey'. http://m.everydayhealth.com/sexual-health/dr-laura-berman-books-to-read-after-fifty-shades-of-grey

Mentioned in the Smashwords blog. http://blog.smashwords.com/2012/11/how-to-sell-ebooks-at-apple-ibookstore.html

I’ve also been included in Breakout Books and Readers Favourite promotions in the iBookstore, but for some reason it’s not letting me upload photos… oh well, you’ll have to imagine them on there!

Thank you for making it all the way to the end. I promise from now on to keep my blogs shorter and with less information!!